Today was my first full day at Rancho Margot; learning more about sustainability, carbon neutrality and renewable energy was all part of our day at the ranch. There have been two fun and playful golden retrievers at Rancho Margot that have been following us around the ranch so far which has been great! After we finished breakfast this morning we started our guided tour of the ranch. We started our tour by playing a fun game of trivia to get us going, our guide took us to the first exhibit which was a green roof. Green roof’s have become popular in cities where there is limited space and to also reduce the heat island effect. At Rancho Margot they have over 400 acres of land, and it is in the forest so they don’t suffer from either of those issues. However, our guide told us that at Rancho Margot it helps promote sustainability and it also improves the biodiversity of the ranch. 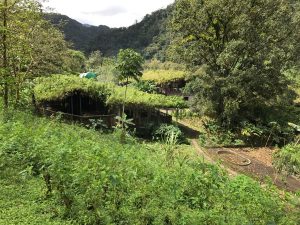 Our next stop was to the chicken pen, where we saw all of the farms chickens and chiclets! On most farms, especially those producing for large commercial purposes, chickens are primarily fed corn meal and filled with hormones to artificially increase their size and maturation. At Rancho Margot the chickens are fed with vegetables, because it is sustainable and much healthier for the chickens and important for their wellbeing. The chiclets we got to see were only one-week old and being held in a special pen to keep them warm. I definitely enjoyed holding the baby chicks, unfortunately one of the chicks pooped on my classmate’s hand, things happen!

Once we were done seeing the chickens, we headed towards the stables where they keep both the pigs and cows. The first thing I noticed about the pigs, the female pigs that were nursing were held in extremely small living quarters. The female pigs have to stay in these tiny pens for up to two months while nursing, and sometimes more so that they don’t get pregnant again right after nursing. Sadly, not everything works to the benefit of the animals and at small-scale farms this is sometimes the only efficient way they can maintain the animals. We did however get to play with the baby piglets which was quite entertaining to say the least! The piglets are adjusted to a specific warm temperature in their pen and can only be held a certain way, so when we picked them up they were not happy one bit. 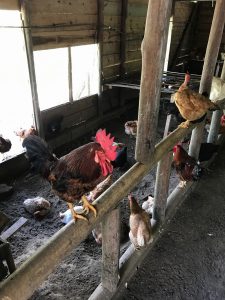 The cow stable is what we visited next, seeing the entire process the farm has them go through, from eating their feed, to  producing the manure, and making the fertilizer. At Rancho Margot, the cows feed on the banana plant rather than some grain-based feed other farms would use for cost efficient purposes. Not only is this a sustainable practice which benefits both the farmers and the cows, but this would be a natural process for the cows which is much more beneficial for the environment. Our guide surprised by then asking for three volunteers, but not telling us what for. After the three were chosen, he said they would eat the worms that clean out the cow manure. This was surely the highlight of the day, as Josh and Jake along with our guide, swallowed the worms full! Everyone laughed and thought it was gross, however it is actually very good protein for you. We got to tour the garden next and see the lemongrass plants, cilantro plants, and mint that they had growing. On our way out of the garden, we got very lucky and had the opportunity to see a tree frog just sitting on one plant, this was quite special. 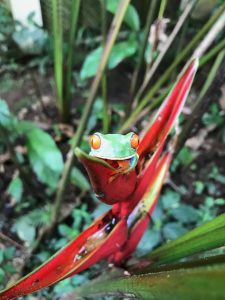 At the end of the day we got to end our lunch with a special talk from the owner of Rancho Margot. This was really fun and engaging because he was able to explain to us the impacts his ranch has been able to make on the community and environment. The most important single piece of advice I took away from his talk, was that in order to create something both good for the environment and community is to not build something after a business model, but to build something in order to better a local community; in turn helping not only the people in the community but all of the nature around. When we arrived to Rancho Margot, I was not sure what to expect, but this was most definitely one of my best experiences here in Costa Rica. Tomorrow awaits!!!