Don’t judge a fruit by its cover

The video above shows the way bananas are brought to the production plant. It’s this neat little train that someone drives, and the bags of bananas hang from the poles attached to the cart. The bags are made of plastic and are designed to protect the bananas delicate skin (they can’t go to market if they’re blemished in any way), and from pests who would damage the bananas by either eating them or spreading a fungus.

After visiting the plantation, we headed to the processing plant. Unfortunately I don’t have any photos from this portion of the trip; due to the competitive market we had to leave our cameras in our pockets. While seeing how the bananas were prepared for the market was interesting, the most impactful part of this visit was seeing the number of bananas that were deemed unfit for market. Blemishes on skin, differences in length, and missing bananas from bunches all disqualified bananas from being shipped out. While they could be salvaged and sent home with workers, and/or composted. However, on plantations where the number of bananas harvested and discarded is higher and compost may not be utilized, the amount of waste that would produce is more than likely astronomical in size. A lot of people were surprised by the reasons the bananas were discarded, but when you consider why we choose to not buy certain fruits (blemished skin or an appearance we’re not accustomed to), this isn’t at all surprising. Why waste the space on shipment if we know the good will never be bought? Below is a picture of one of the bananas that was discarded; the skin is slightly blemished, leading it to be set aside from the bananas destined to the market 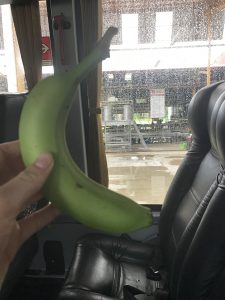 Last year I saw the beginning of Just Eat It: a food waste story. In the documentary, it stated an alarming fact: over 60% of food produced for consumption never reaches the market because of blemishes and other visual defects.  Thousands of gallons of water, immense amounts of energy, and other irreplaceable factors were spent on producing this food, and it gets discarded because of how it looks. This is sad not only because of how much is wasted, but also because of how many people go hungry every day because they cannot afford food.  This kind of food model is not sustainable, and needs to change if we want to truly become sustainable. Countries like France have already begun programs that offer “uglies” produce at discounted prices, and I see no reason why the United States can’t do the same.

Eat (all of) your veggies and fruit!