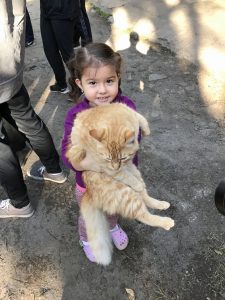 Today started out with a bang! We began the day by taking a short walk to the Monteverde Cloud Forest Reserve. Before entering the Forest Reserve, we stopped by at 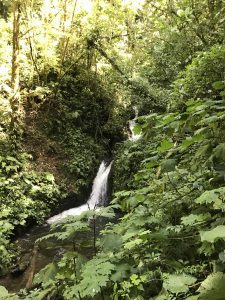 a small shop where many hummingbirds gathered. The Monteverde Cloud Forest Reserve was wonderful and an experience to remember.

Monteverde’s Cloud Forest Reserve has an extensive ecosystem with over 2,500 different plants and over 400 bird species. The biodiversity is amazing, the amount of organisms that make up the 10,500 hectares in the forest is just incredible. Adrianna took us through the Reserve and showed us several different interesting plants and trees. I learned about epiphytes, which are a type of flora that grows on other plants. Epiphytes take the moisture and nutrients from the air to balance out the amount of moisture the plants are receiving; epiphytes are really cool because unlike parasites they only support the plants and don’t cause any negative damage to their hosts. To finish off our visit in the Cloud Forest Reserve we got to see a magnificent waterfall at the end.
After finishing our tour at the Forest Reserve, we headed over to lunch, Adrianna told us we were in for a treat. I had the most amazing food since I’ve been here, and it was at an Italian restaurant! I had a delicious pizza, and I shared a fantastic pasta with my friend Rin. When lunch finished we headed over to town to do a little shopping trip.

In the town of Monteverde I elected to hangout with our joyful and funny driver Beto. We went to a local sports store to try on some shorts, and while we were there we enjoyed a soccer game on tv while talking about Costa Rica. I really love talking to Beto and learning from him; he has taught during this trip that if you love what you do and you do it well, you make other people’s lives better. I’m going to miss Beto when we leave Costa Rica.

To finish our day we arrived at a local Quaker’s house, Marvin Rockwell, to learn about his experiences in Costa Rica and how he came from the U.S. in the 1950’s. Marvin told us all about his history and his family, the religious values he held which ultimately led him to Costa Rica, and how he changed his community in Costa Rica. The most touching story Marvin told us was about adopting a young boy when he was single so he could help raise him with a healthy life. At the end of the presentation we heard from Marvin’s wife and saw a photo of all four of his kids which was really beautiful. One thing I took away from Marvin was that in life, to be successful and to follow your own path, you must think outside the box and do the things that align with your own values. I was really happy to hear how much he helped the local community in Costa Rica, and how his own Quaker values led him to an amazing place in life. When we finished our talk with Marvin we met his great-granddaughter who was very cute and had an adorable cat named Milan, this was quite the scene! Tomorrow we head out to the beach for a special day on an island, and oh man am I excited!