Today started at Guayabo Lodge, with a nice breakfast on the patio. After checking out, we headed to La Selva biological center, but not without a quick pit stop. We stopped at this tourist reception area that was well known for having sloths. Sure enough, Adrianna found not one, but two! They were three toed sloths, and while they didn’t move all that much, watching them reach for some leaves to munch was quite entertaining. After the sloth photo shoot, we were back on the road.

Finally, we arrived at the biological center, where after a quick lunch we began our tour. Luck was on my side today, because we spotted a THIRD sloth. This sloth was a two-toed sloth, and he was just chilling by the bridge we had to walk across to get to the reserve. I caught the below photo by focusing my phone camera over the guide’s telescope. 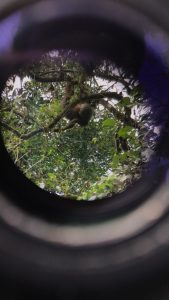 The biological center is home to an astounding percentage of the world’s biodiversity, demonstrable in the over 500,000 species of insects alone that call the area home. During our walk through the forest, we saw spider monkeys, toucans, and leaf cutter ants. Perhaps one of the most interesting connections I made, however, was while we were studying the root system of tropical trees.

Compared to trees in other biomes, tropical trees have very shallow, but fairly dense, root systems. Combined with the amount of rainfall the biome receives in a given year, this has the potential to lead to uprooting of trees, which is no bueno. To combat this, the trunks of the trees are triangular. To demonstrate the stability this provides the tree, the guide used her telescope stand as an example. The weight is evenly distributed, making it stable in wind, rain and virtually any other element the biome can throw at it. This modeling of the telescope after the tree trunk is a perfect example of biomimicry, which is when an adaptation of nature is applied to man-made technology. Another example of biomimicry includes Velcro.

Finally, we ended the day at the Dole plantation. It was a pretty interesting recap and addition to what we had learned at EARTH, and Carlos, our guide throughout the plantation, made his presentation engaging and interesting. We were able to take pictures at this plantation, and at the end we were awarded for our attentiveness with banana liquor shots 🙂

I knew it was going to be a good day when the sloths made appearances, and I was right. Tomorrow we are going to be hiking the volcano, which is going to be fuego.