That car ride was bananas, B-A-N-A-N-A-S 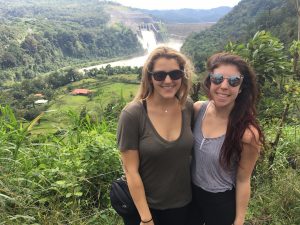 What a fruity and bumpy day we had today! The morning started off bright and rainy at Earth University where we spent our last few hours visiting the banana plantation and learning about the school’s academic model. David took us to the banana plantation and showed us the whole process that the fruit goes through from the seed to the ground all the way to being packaged up, ready to ship over to Whole Food Grocery stores all over the world! The banana field at the university is over 600 hectors (BLANK acres!) and has around 250 workers tending to it year round. Workers are paid a few cents more than those surrounding it and are signed onto 3 month contracts, then they must take a 21 day leave, which I guess is good to make sure they are not overworked and give other community members a chance to work as well. The process for the bananas to be ready to be picked takes up to 9 months; which I find an extremely long time to develop! Once they are ready to be picked, they are cut down from the tree and put on a conveyer-swing-type-machine that goes around (im guessing) the whole plantation to make it easier to transport the bananas to the next stage. They are then weighed as a whole, then cut by 6 to a bunch or so. Then they are put through a washing machine to get the sap off and thrown into a giant tub of water to rinse out. Then other workers cut the excess branches from the top and throw them onto another belt where they go through a shredder to be put in a compost area. The bananas are then glossed over with a liquid to restrict the sap from coming out of the top of the banana, sticker-d with the Earth University logo and Costa Rica Sticker, and are packaged and set for shipment! It was crazy to see the whole process come together, and i’m definitely going to keep my eye out next time I go to Whole Foods!

We then sat in a classroom for a quick overview of the academic model of the school from one of the English Professors, Professor Leon, where we learned about their vision, academic goals, and what they hope to shape their students as after they graduate. They really emphasized their goal for students to bring back what they learned to their communities from which are mostly very poor, under-developed areas and make a change/mark on that place in a positive way. I still cant believe that all students, if they don’t already speak Spanish, must come to the school 4 months in advance to classes starting to learn the language and be able to speak in fluently, I would NEVER be able to survive (i dont think)! Professor Lemon talked about how even some don’t know english either, so they are working on learning TWO LANGUAGES AT ONE TIME (which i find unbelievable)!! These students obviously have the passion and drive to make an impact wherever they go after, just by the fact they are willing to put so much in to getting this kind of education.

After our last lunch at the University, we said our goodbyes and set off for the Guayabo Lodge. On our way we made a surprise stop at the Reventazon Hydroelectric plant, constructed between 2010-2016 by thousands of workers costing over 1400 million (im guessing she also meant 1.4 billion) dollar project! It was an incredible sight and seeing the pride that Adriana had in showing it to us really shows how the country strives to be as resourceful as possible.

Here we are now at our next stay at the Guayabo hotel, and i’m ready to see more!