Today as every day everything started off very well.  We had breakfast at the Rancho Margot and we were quickly off to Fonda vela in the Monteverde area.  The day was synonymous with a treacherous ordeal in a bus.  The longest I’ve ever been on a bus has been max one hour, and the longest I’ve ever been in a car has probably been 3 1/2 hours. Therefore the bus ride we took today was of incredible significance and very tiring indeed since it lasted over four hours.

However there was an upside to this treacherous ordeal and that was that we had a delicious meal at a local restaurant in Monteverde. I ordered a hamburger and some fries and it was very good.  After this we came to the hotel and after splitting a cab ride with the professors we arrived safely.  Like most other people in my class we did not go zip lining,   We nearly preferred to rest for those two hours. After that we ate some dinner that was also very good and we called it an early night. While it had a very long bus ride today was a very good day with a great hotel in the end. 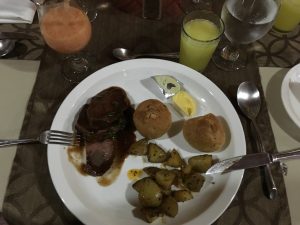