The sun will come out TODAY

Today was eventful. More tiring than yesterday but also more exciting. We started the day off with bomb breakfast which included sweet bread then left directly after. Short ride to CATIE but it was one of the most interesting legs of the trip so far. When we got on the bus it was so cold even the water left overnight was frozen but it was also bright and sunny for the first time for the beginning half of the day. At CATIE after meeting to talk about graduate education we went to explore a cacao plantation. I think this is the most marvelous thing because it has ones from my country and I didn’t even know that was a fruit there. Also it’s multipurpose. It’s a fruit (which tastes a lot like guinep) but the seed is then used to produce chocolate. 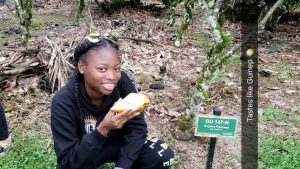 Afterwards we had lunch and I have to say one of the best yet. It was my favorite, the sausage was spectacular and even a little dog came through. Afterwards we explored the farm which had a beautiful stallion and 4 ‘little’ pigs. Later on we continued on to a coffee plant where we found out more about the production of fresh, organic and sustainable coffee. I even drank some. I was even able to buy my mom something (because I wouldn’t hear the end of it if I didn’t). We also got to stop at the store and buy little trinkets. I was sad because Kim got an umbrella for so much less than I did yesterday but I did get a windbreaker which is important. At the end of the day I just chilled with my classmates working on our assignments and laughing till the break of dawn.