Today was special; I saw two sloths today, a spider monkey, and I had a shot of banana liqueur! Shortly after breakfast today, our class left Turrialba and headed to La Selva Biological Station of Tropical Studies. On our way to the biological station we stopped to use some bathrooms at a small restaurant and a sloth sitting in one of the trees, this was the first time I had seen a sloth in person; I found this a lot more exciting than I thought it would be. The sloths are very lethargic animals and we saw the three-toed sloth specifically. When we arrived at the biological station we ate lunch together and split up into two groups to go inside La Selva. The first animal we saw together was a sloth, pictured perfectly scratching itself. 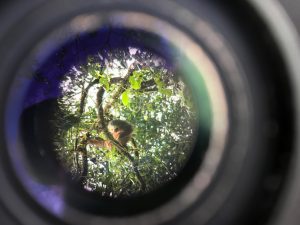 Once we got further into the biological station our guide pointed out some Toucan birds which were so colorful and bright. However, today’s highlight was getting to see a spider monkey jumping through the trees! I was not able to to get any photographs of the monkey, yet it was remarkable getting to see a spider monkey so up close. One other interesting thing we got to see was a bullet ant, which is one of the largest ant species that also has a very potent sting, which our tour guide told us can sting more than any other insect in the biological station. 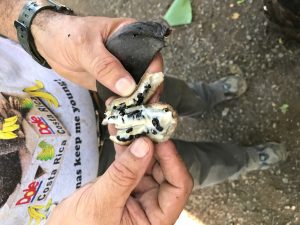 When we were done at La Selva our ENVS class and the literacy class split up into two groups to do different activities. As part of the ENVS class I headed over to the Dole banana plantation with my group. At Dole we met our guide, Carlos. He was quite extravagant and entertaining. Carlos carried around a large machete the entire time using it to show us different things about the banana plant. Something very interesting that people don’t know about is that the Banana plant is not a tree, it is made up of nearly 90% water and Carlos told everyone that there are zero banana trees on the plantation, because they are all banana plants! We learned that banana’s made for production cannot fertilize, other wise seeds would form inside of the banana. They clone banana’s so that there are no male flowers in the banana plant and there are only the female flowers left in the banana bunches. Carlos showed us an exciting demonstration of some workers at Dole cutting down one banana plant which was quite thrilling and exciting for everyone. Once we excited the banana plantation we headed into the factory to see the production process to ready the banana’s for the market. Carlos then took us inside a small shop at the factory and gave us a shot of banana liqueur that was 30% alcohol! I can definitely say that was the first time in my life I had taken a shot of banana liqueur.

Going to La Selva and the Dole plantation today was fun and eventful, I got to see my first sloth today as well as my first spider monkey. After we were done today we headed to our wonderful resort Sueno Azul. We finished the day relaxing in the pool and having a great dinner. Tomorrow we will take off to Arenal Volcano which I am very excited for; another adventure awaits again. 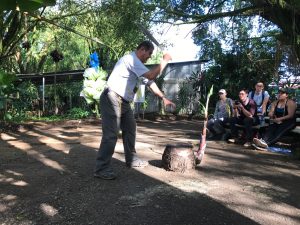