I started the day with a yoga class, which was really relaxing. The studio is open-air and situated right next to the river that runs through the ranch, lending the perfect amount of white noise to meditate to. After refueling with breakfast, we took a group tour of Rancho Margot.

Development on the land began in 2004, with bungalows and bunkhouses being erected in ways that encompassed sustainable applications, like green roofs and low-energy appliances. The Ranch’s electricity is delivered via a fully computerized electrical grid, and they produce nearly all of the goods they need to run the business. Vegetables and livestock are raised without the use of pesticides and antibiotics, and any uneaten food is sent to the biodigester, where the leftovers are converted into energy to power the grid.

After lunch, we were able to meet the owner of the ranch.  He spoke to us about his vision when he originally bought the land, and again when he began developing it. He worked alongside the community members to connect them to villages and towns where the prices for goods had more competition and were more affordable. He hired locals to work at the ranch, and employment is year-round, rather than the traditional seasonal employment the hotel industry sees. Volunteers also work at the ranch, and bring an integral part to the community feel of the ranch.

During the Q&A session we had, he said something that really stuck in my mind, “(As a society), our view of what return on investment is is totally wrong”. Typically, ROI is measured by how much money you get back on top of your original investment. Instead of worrying about money, we should be more concerned with the intangible: happiness and sustainability. Money has and will only get us so far, and its power to cloud what really matters in life, relationships and self-actualization, is detrimental to the individual, the society, and the environment.

The discussions we’ve had throughout this trip so far, combined with the experiences I have had, have drastically altered my outlook on what I can and cannot achieve in regards to sustainability. It’s very easy to feel small and at times, belittled for wanting change that is so counter intuitive to everything we are taught to do: consume without thoughtfulness. In order to deviate from this norm, mindfulness is required. Staying mindful of how our actions impact not only ourselves, but the communities and environments we belong to, is how we are going to be able to usher in a sustainable reformation of norms. 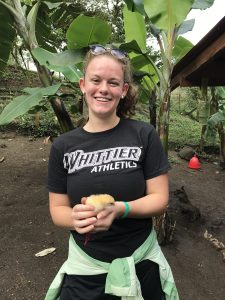